The Hidden Lives of Bullocks

Bullocks are as diverse as cats, dogs, and people: Some are bright, whereas others are slow learners. Some are bold and adventurous. Others are shy and timid. Some are friendly and considerate. Others are bossy and devious. Bullocks are social animals who form long-lasting, cooperative relationships. They recognize faces, nurture friendships, and make decisions based on altruism and compassion.

When allowed to live in herds, cows and bullocks form social hierarchies and will develop “clicks” of two to four animals who spend their time grooming and protecting one another and may even hold grudges against other groups or individuals. When separated from their best friends, cows become noticeably stressed and anxious.

These gentle giants mourn the deaths of and separation from those they love, even shedding tears over their loss. The mother-calf bond is particularly strong. There are many accounts of mothers who continue to call and search frantically for their babies after their calves have been taken away from them and even a report of a mother who walked 7 miles to be reunited with a calf who had been sold at auction. 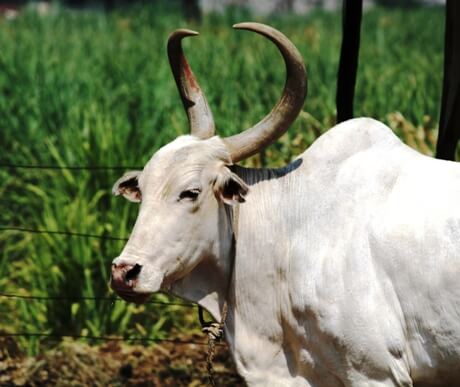 Research has shown that cows clearly understand cause-and-effect relationships—a sure sign of advanced cognitive abilities. Bullocks are frequently observed pumping water with hand pumps and have been known to let themselves in and out of enclosures by opening latches or pushing buttons. Researchers have found that cows can figure out problems, and they also, like humans, enjoy the intellectual challenge and become excited—sometimes even jumping into the air—when they find a solution.

A herd of bullocks is very much like a pack of wolves, with alpha animals and complex social dynamics. Each animal can recognize more than 100 members of the herd, and social relationships are very important to them. Cows will consistently choose leaders for their intelligence, inquisitiveness, self-confidence, experience, and good social skills, while bullying, selfishness, size, and strength are not recognized as suitable leadership qualities.

Bullocks have great memories and can remember migration routes and the location of watering holes, feeding areas, and newborn calves. They also learn from one another’s mistakes and worry about the future. It’s no wonder that cows sent to slaughter have been known to attempt elaborate escapes, including leaping over high fences and swimming across rivers to freedom.

When workers at a slaughterhouse in the U.S. went on break, a cow later named Emily by her rescuers made a break of her own. She took a tremendous leap over a 5-foot-high gate and escaped into the woods, surviving for several weeks during New England’s snowiest winter in a decade, cleverly refusing to touch the hay put out to lure her back to the slaughterhouse. Thankfully, a sanctuary was allowed to take Emily in. Her life is a testament to the fact that these animals don’t want to die.