The Tractor Project has already saved nearly 5,000 bullocks—4,954 to be exact—from toiling under the yoke in sugar factories. And it’s only just begun. 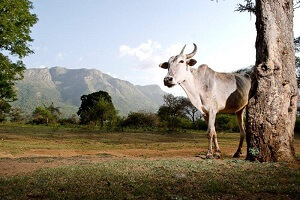 The goal of The Tractor Project is to help subsistence farmers afford mini tractors that they can use for the heavy labor of hauling sugarcane, in place of their bullocks. Animal Rahat has worked with the manufacturer of the mini tractors to convince it to give sugarcane factory workers a break on the price, and has also convinced the factories to offer the workers loans with which they can purchase the equipment.
It’s a win-win-win situation. The tractors are much more efficient than animals, meaning that the workers and the factories can both increase their productivity and output. And the bullocks are spared from struggling to pull carts piled high with sugarcane under the blazing sun, during which they are frequently denied sufficient water, food, rest, and veterinary care. When too ill or exhausted to continue, they are beaten, whipped and yanked roughly by wires threaded through their pierced noses. 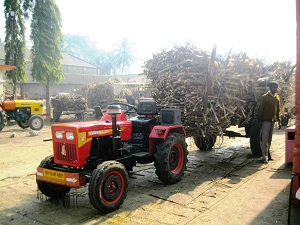 To get the project off the ground, Animal Rahat helped purchase the first five tractors, which were used by workers at the Kranti Sugar Factory in Sangli. What began with five tractors has grown to 988. That’s a lot of workers’ lives improved and a lot of bullocks spared. Farmers without their own land purchased tractors at the beginning of the sugarcane season rather than purchasing bullocks, meaning those animals never even entered the cycle of working animal abuse. And land-owning farmers retired their bullocks to their own fields, where the animals  pull much lighter loads on soft earth for just a few hours each day.
Animal Rahat doesn’t intend to stop until every one of these gentle animals is retired from hauling sugarcane.
But they can’t do it alone. The organization relies on donations to do the work that they do. You can find the donation link for Animal Rahat here.