For Waheed and Tracy, what could have been the end of the road became the beginning of a love story.

Spending their lives forced to provide cheap thrills nearly killed Waheed and Tracy. But their rescue by Animal Rahat gave them both a new life—and love.

Animal Rahat found 14-year-old Waheed tied up under a bridge. His owner hadn’t bothered to give him food, water, or badly needed veterinary care but was forcing him to give people rides. Camels, like all animals, prefer to drink water every day and can drink more than 20 gallons at a time. When camels are deprived of water for too long, their eyes fill with tears and they begin to moan. As they dehydrate, part of their hump wastes away. When the hump is completely gone, the camel dies. Rescue came just in time for Waheed—he had virtually no hump left. 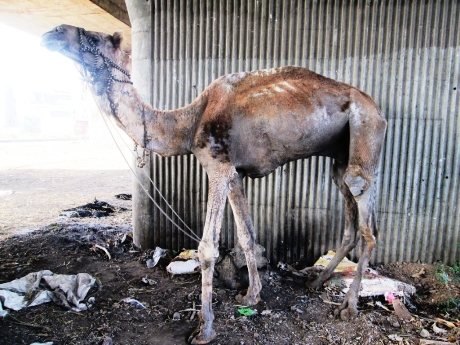 Rescuers immediately transferred the ailing camel to Animal Rahat’s Home for Retired Bullocks and gave him food, plenty of water, rest, and the veterinary care that he desperately needed.

Despite his poor condition, Waheed was cooperative and sweet. Before long, he gained several pounds and began growing a new coat, and his hump began to return. But his life was about to get even better. 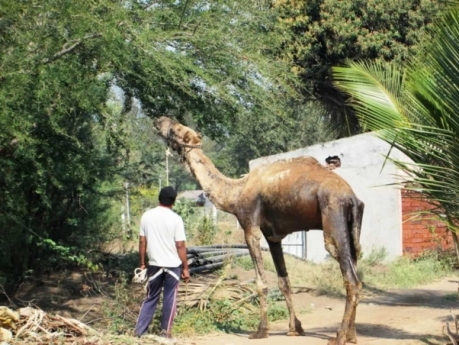 After Animal Rahat initiated an inspection of Grand Circus and found the animals used by the circus to be living in miserable conditions, the circus’s management agreed to relinquish all 18 animals and become animal-free. One of those animals was a female camel named Tracy, who was transferred to Animal Rahat’s Home for Retired Bullocks. 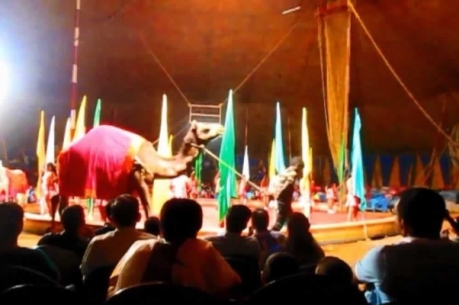 The staff gave Tracy food, water, rest, and treatment for severe mange, a skin disease caused by parasitic mites that causes severe itching and resulted in the loss of most of her hair. 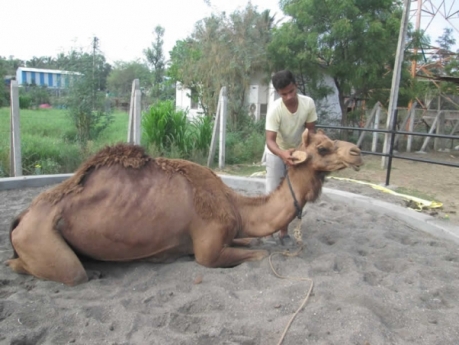 Then Tracy and Waheed met.

From the moment they saw each other, Waheed and Tracy began mirroring each other’s movements, a sign that they wanted to get to know each other. These soul mates–purely platonic, of course, because they’ve both been “fixed”—were instantly inseparable. Now, they spend their time being groomed by Animal Rahat staff, sunbathing, relaxing, and lounging at Animal Rahat’s Home for Retired Bullocks with the other rescued animals. Tracy loves to lie in the shade next to Waheed, and he relishes the opportunity to gather leaves for Tracy to eat. Instead of being forced to entertain humans, they’ll spend their lives happily entertaining each other. You can help Waheed and Tracy live happily ever after by making a donation to Animal Rahat.