As you may know, Animal Rahat veterinarians have been treating two sorely neglected elephants: Ram Prasad, who belongs to some stubborn and insensitive temple trustees and is used for ceremonial purposes, and Gajraj, an older tusker. As of last month, thanks to the team’s diligence, they have now taken on a new elephant patient named Sunder, a very sad case indeed. 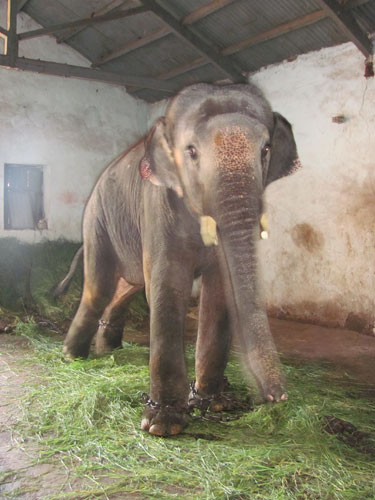 Sunder is 13 years old, a young juvenile boy, and has spent the past six years chained inside a dismal shed at a temple in Kolhapur. His previous mahout (handler) grossly abused him, and Sunder bears the scars to prove it. He now has a new mahout, with whom the Animal Rahat vets have made it a top priority to try to develop a good rapport, but the mahout, believe it or not, is afraid of Sunder and has never taken him off the chains, not even for a walk.

The temple authorities resisted giving the Rahat team access to Sunder, but they were able to succeed through a combination of Dr. Sudheesh’s impressive military credentials and because one of Animal Rahat’s ambulance drivers is related to a priest in the temple. It’s all who you know! 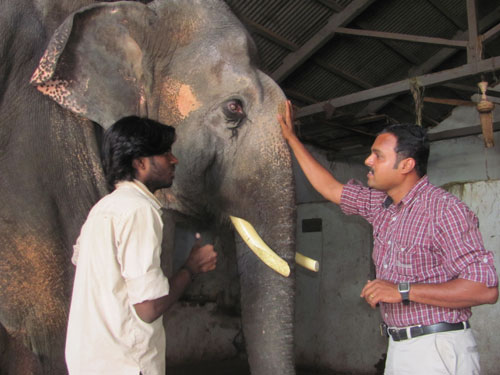 After examining Sunder, Rahat’s vets determined that he was anemic and dehydrated and has proptosis (bulging) of one of his eyes, probably because of head trauma, most likely from being severely beaten for being mischievous as a youngster. Thanks to the support of caring people like you, there is hope for the first time ever for Sunder, and time is of the essence. If Animal Rahat does not get him proper care now, he will suffer unimaginably when he goes into musth (breeding rage). Vets have embarked on a solid plan to improve Sunder’s living conditions—the immediate priorities are to get him out of his dark and damp enclosure, establish a decent watering system, get the mahout to walk him daily, and improve the amount and quality of his food. What Animal Rahat will ultimately try to do is get him away from there, but that mountain is a high one to climb.