You may recall that during the annual Chinchali Fair, thousands of bullocks and ponies are forced to haul carts jam-packed with large families for two days straight, some for up to 170 miles and then back again. However, more than 1,250 animals were spared that grueling journey to the fair this year because their owners took us up on our offer of free rides on the buses that wonderful Animal Rahat members sponsored, like the one shown below: 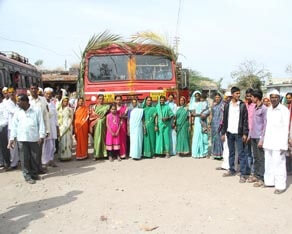 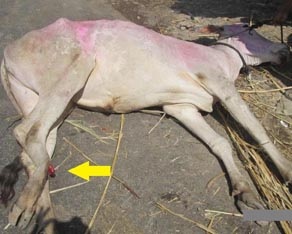 For the thousands of animals who were forced to make the trip, the Animal Rahat staff was out in full force providing relief and working with police to enforce animal-protection laws. The staff needed a rest after working around the clock for several days!

The first victim of the fair we found was the bullock shown above, who had a bone protruding from his leg. He was pulling a cart to the fair when he was hit by a bus. All sorts of chaos then ensued, and the cart owner and the bus driver ended up at the police station, but no one helped the suffering bullock. After three hours of fierce negotiating, we persuaded the owner to allow us to euthanize the animal.

In addition, we set up shop at the Siddheshwar Fair, the Sangola Fair, and—for the first time—the Nagothane Fair, where our team did the following:

On behalf of the thousands of animals whose suffering was relieved through the work of Animal Rahat this month, thank you for your compassion and for your interest in this vital work. We are so very glad to have you on board! Please keep us in your heart.