The Hidden Lives of Elephants

In their natural environment, elephants are highly social animals who live in multigenerational matriarchal herds. These tight-knit families work cooperatively, defending one another, searching for food, and caring for offspring—even receiving help from “babysitters” within the herd.Elephants talk among themselves, make group decisions, and celebrate achievements and momentous occasions.

A Lesson in Empathy

Elephants have elaborate mourning rituals, often remaining by their dead companions for days on end. Groups of elephants have been observed stroking and examining the bones of family members, offering condolences to one another, and “burying” the body with twigs and grass. Even those who were not closely related to the fallen animal will make long pilgrimages to visit the grave site.Just as humans visit the graves of their lost ones, elephants continue to visit and pay homage to the bones of their family members for years to come. When an elephant was killed by a train in eastern India, 15 elephants returned to the tracks for days on end, in what appeared to be a mourning ritual or a distraught attempt to avenge the death of their family member.

Elephants will often assist ailing family members and attempt to nurse them back to health. One researcher recalled watching as an elephant family frantically tried to revive a group member who had been shot, lifting her up with their tusks, pushing her, and even stuffing food into her mouth.

Experts have also determined that elephants offer consolation to individuals who are in distress. Animal behavioralists observing a pack of elephants found that when one herd member showed signs of distress, others rushed to his or her side, cooing softly and stroking the upset animal. 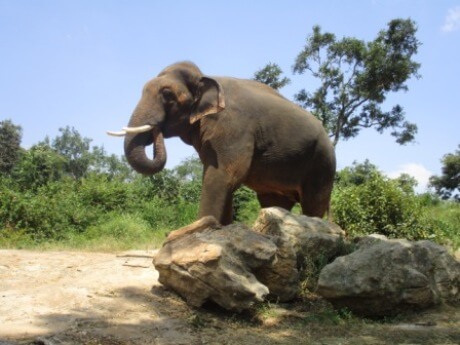 Elephants have a high degree of self-awareness and can even recognize themselves in mirrors. Elephants with a smudge on their faces will try to rub them off when they see their reflection. They also join dogs, cats, and bottlenose dolphins among the few species who understand human pointing.

Elephants are frequently observed using tools. To prevent sunburn, they will toss sand over their backs. Sticks and other vegetation are commonly used to scratch itches, remove ticks, and swat flies. Elephants in captivity have been known to use “stools” to help them reach foodand are notorious for deliberately shorting out electric fences by dropping rocks and logs on the wires.

In addition to the trumpets, grumbles, ear flapping, nudges, and other signs perceptible to humans, elephants communicate through low-frequency rumbles that humans can’t hear. Using their trunks and feet, they can sense these low-frequency vibrations from miles away, allowing them to send messages and warnings over long distances. 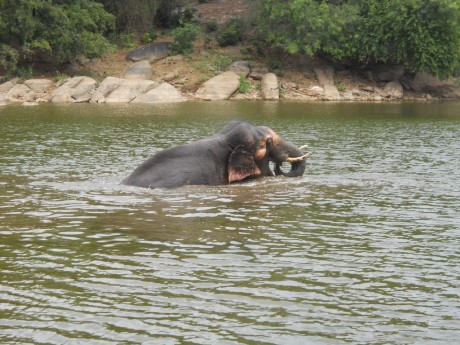 Elephants have a keen memory of events, places, and individuals. Matriarch females can recall where their mother or grandmother found water decades ago and will avoid taking the herd into areas where family members have been poached—information that can save a herd during difficult times.

And who could forget the emotional reunion of Shirley and Jenny—who had briefly crossed paths more than 20 years earlier?

The best thing that you can do to protect these intelligent social animals is to avoid circuses and never patronize anyone who begs or performs with them.