Playful, Smart, and Social: The Hidden Life of Donkeys

In their natural environment—not staggering along dusty roads while carrying heavy loads of bricks—donkeys are playful, gentle animals who form faithful bonds and express an eagerness to learn. Exceptionally intelligent, they have phenomenal memories (and can recall complex routes and recognize animals they haven’t seen for years) and also have a logical, flexible approach to problem-solving.

People who know donkeys report that they are smart, personable, and affectionate. They understand dozens of voice commands, come running when they are called, and are fiercely loyal to those they trust.

As social animals, donkeys enjoy company and develop strong emotional bonds with other animals. Donkeys often pick a best friend, with whom they spend most of their time, and pairs are frequently observed grooming one another by softly scratching and nibbling their partner’s neck and shoulders. When separated from their companions, donkeys become noticeably anxious and distressed, often vocalizing, pacing, and even falling into a depression.

Donkeys communicate by using a wide range of body language and vocalizations. Upon greeting, donkeys will often blow gently into one another’s nose, which imparts important information. Donkeys carefully move and position their heads, necks, bodies, and tails in order to give clues as to their moods.

In a desert environment, donkeys must often spread out to find food. With their loud brays and keen sense of hearing, donkeys are able to communicate from miles away. 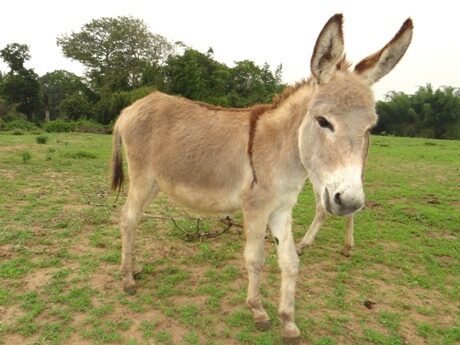 Compared to horses, donkeys show a limited response to fear, pain, and illness. These stoic animals rarely panic and may even appear catatonic when in distress. When faced with a potential threat, donkeys prefer to plant their feet while they analyze the situation. All too often, donkeys are misdiagnosed as “stubborn,” when they are likely just experiencing fear.

Exceptionally strong animals, donkeys are often forced to transport heavy loads of sand, bricks, and stone. These gentle animals are often left to suffer from dehydration, malnutrition, and untreated ailments. The Animal Rahat program was created to make a difference in the lives of working bullocks, donkeys, ponies, and horses. Please make a donation to this lifesaving program today.